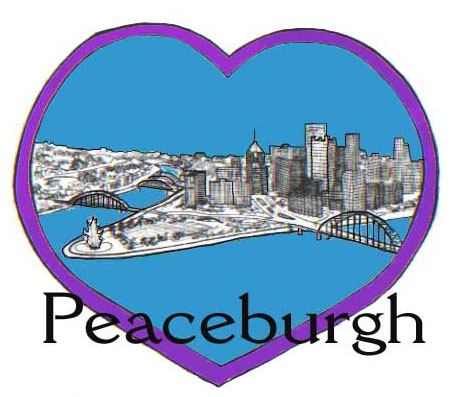 Vision Statement
Who We ARE: We are a growing, diverse community of Pittsburgher’s who are working to create a healthy, conscious and loving community. This website is the only official Peaceburgh network which will enable us to connect with like minded people who want to be self empowered, live peace within, and intelligently create change without. The Peaceburgh network would love your participation in these amazing times as we shift towards the world we’ve always wanted to live in.

Why is Pittsburgh a place of power?
Pittsburgh is a natural power place. Think of a power place as a power plant that puts out energy. This power is generated by the combination of natural elements, three rivers (plus the hidden (underground river) nestled below the dramatic heights of Mt. Washington. The power happens when the Monongahela and Allegheny Rivers merge and create the beginning of the Ohio River, thus forming a confluence in Pittsburgh. A heavy surge and churning of water when rivers meet, creates a very powerful place. Energy is amplified. So being Peaceful is amplified.
The Allegheny Mountains are known to be the oldest mountains on Earth. Sometime around 65 million years ago is when the three rivers were formed.
Our ancestors were able to harness this power. Did you ever go to a powerful place and ‘feel’ the buzz of the energy? We know the ancients, met in power places and the priests/shamans knew how to access the power of Earth Energy. Most of our churches are built on ancient power spots. There is a goddess spring under Chartres Cathedral in France. It was a meeting place for thousands of years before a church was built on the site.
Power places were first discovered using dowsing rods, and are still used to find the ancient ley lines in the Earth. Because power sites would amplify energy, ancient priests/shamans would access that power in order to manifest crops or rain to feed their people. If you matched the energy, (like to like) then you will access the power of the place.
If you wanted fertile fields for growing crops, they would put a fertile woman in the field, or a father who had many children. The shaman would chant or do a calling around the site to harness the energy. You might think of it as an American Indian rain dance.

Here’s an example from Tamar George. “One day I was driving over the Fort Pitt Bridge and there was only one cloud in the sky and it was dropping raindrops only in the Three Rivers Stadium. I knew my son was there at the stadium for a rock and roll concert. The announcer on my car radio said, “This is the strangest thing, folks. I’m looking out my window from the Gateway building at the sky and it is only raining over the stadium. Seriously folks, no other clouds in the sky anywhere except one dark rain cloud over the stadium!” When I returned home, I asked my son if he had been praying for rain. He replied that everyone was praying for rain because it was so incredibly hot in the stadium.” We are still manifesting or creating rain dances!
Pittsburgh has long been recognized as a power place. The first humans to settle in Pittsburgh were naturally attuned to power and for generations harnessed that power. We know this because the most ancient sign of human civilization in either North or South America is the Meadowcroft Rock shelter in Avella in Washington County PA. A radiocarbon dating in 1974 showed that burnt wood from a campfire dated 16,000 years ago. Tribal populations would move from north to south looking for food.

What about a Mayan Connection to Pittsburgh?
If tribal people moved North to South looking for food, then could it be that the tribal people here thousands of years ago became the Mayan’s? The Mayan fifth world finished in 1987. The Harmonic Convergence was August 15, 1987. The sixth world starts in 2012, when our Solar System will line up exactly with the center of our Galaxy, the Milky Way. This is the end of a 26,000 year cycle.
The Mayan sixth world is actually a blank book. (No pages are recorded.) We call this new time the Aquarian Age, which is here now. This means it is up to us, as co-creators, to start creating the new world we desire. We are co-creating Peaceburgh together. We would like to share in creating this new city of light!